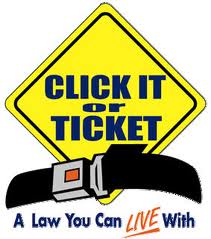 About the Program
Click It or Ticket is a high visibility enforcement program designed to raise safety belt usage and save people from death and serious injury on the streets and highways. Virginia's statewide safety belt compliance rate is currently 80.5%. The goal of the 2011 Click It or Ticket Mobilization is to raise the rate to at least 83.7%; however the goal of our department is 100%.

The campaign consists of awareness through strong educational messages mostly on television and radio stations in local areas, strict enforcement, and numerous public appearances by departments in support of the program. Consistently, surveys are completed to determine the current safety belt usage rate.